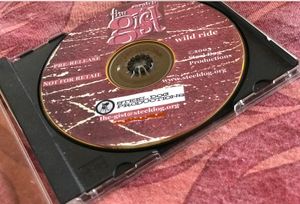 In the year 2000, I released a CD of original music. Right about then, the Internet was making it seem like it might be possible to book shows and sell music and build a fan base and all that without the almighty Record Label. The catch was you had to learn a bunch of skills nobody  had yet really quick.

Building a website on a Windows desktop at the end of the nineties was labor intensive. You actually had to produce all the buttons as separate little graphics with different words and colors, and place them precisely where they were to go.

It got prettier on the Mac, if you could read the hieroglyphics.

Derek Sivers stepped up with CD sales, promotional help, and then web hosting for all of us. I’ve never been happier to see a guy actually make money.

I formed a band, toured around, recorded more.

It was all so grand, and by the standards of the times, quite portable.

It may not be fair that the arrival of social media seems to coincide with the first sign of crumbling in this glorious city we had built. Could just be a convenient way to tell the story.

Then my website got a virus. Hostbaby fixed it right away, and helped me get my site cleared by Google quickly.

Facebook refused to take my domain off the no-fly list.  They told me “You’re not supposed to be using Facebook to promote your business, anyway.” Ah, the good old days.

To keep it safe and alive, I made most of my music available free from my website. I couldn’t link to it from you-know-where, but I could still mention its existence from time to time.

But then my last lifeline, Hostbaby, my beloved Derek’s heirs, said they were through. They would lovingly hand me to their chosen scavenger, unless I had another plan. I did not.

It was about to be 2020, and I had a dead website I couldn’t link to from Facebook. CD Baby, iTunes and others were gone. (My first CD is still on Spotify, but if you click through you get some other very different artist by the same name.)

I was nowhere. My van with all my tools had broken down on the side of the road and been picked clean.

So of course I have mastered new tools, and learned some stuff, for example:

Everything’s a little harder now because it’s intuitive. And so simple.

We spent two decades making our files smaller and now they’re not big enough to take up the space in the widget.  But now there’s some cool hero product that makes your pictures big again.  Thanks George!

So now there’s a whole new website up at http://www.steeldog.org/. It has music on it, plus some other stuff. There is more music at steeldog.bandcamp.com. I will keep uploading till it’s all there.

Feel free to share this article to Facebook; I’m dying to know what they do with the embedded link.